Mandarin or Clementine? The difference

Mandarines and clementines have become an indispensable part of the Christmas season. But very few people know which of the two fruits is actually being consumed when they are eaten. And is there any difference at all? We explain how to distinguish mandarins from clementines.

Mandarins and clementines look very similar. While the fruits of other citrus plants like orange or lemon can be easily recognized, differentiating between mandarins and clementines is more of a challenge. The fact that there are innumerable hybrid forms among citrus fruits is of little help. In Germany, the terms are also often used synonymously. Also in the trade, mandarins, clementines and satsumas are grouped under the collective term "mandarins" in the EU class. From a biological point of view, however, there are clear differences between the two winter citrus fruits.

The first mention of the mandarin (Citrus reticulata) comes from the 12th century BC. It is believed that mandarins were originally cultivated in northeast India and southwest China, and later in southern Japan. The cultivated mandarin as we know it was probably created by crossing the grapefruit (Citrus maxima) into a wild species that is still unknown today. The tangerine quickly enjoyed great popularity and was therefore reserved for the emperor and the highest officials in China for a long time. Its name goes back to the yellow silk robe of the high Chinese officials, which the Europeans called "mandarine". However, citrus fruit did not come to Europe (England) until the beginning of the 19th century in Sir Abraham Hume's luggage. Nowadays the mandarins are mainly imported to Germany from Spain, Italy and Turkey. Citrus reticulata has the greatest variety of citrus fruits. It is also the basis of crossbreeding for many other citrus fruits, such as orange, grapefruit and clementine. Ripe mandarins are already harvested for the world market in autumn - they are on sale from October to January.

Officially, the clementine (Citrus × aurantium clementine group) is a hybrid of mandarin and bitter orange (bitter orange, Citrus × aurantium L.). It was discovered and described about 100 years ago in Algeria by the Trappist monk and namesake Frère Clément. Nowadays, the cold tolerant citrus plant is mainly cultivated in southern Europe, northwest Africa and Florida. There it can be harvested from November to January.

How do you distinguish between mandarin and clementine?

The pulp of the two fruits differs slightly in color. While the flesh of the mandarine is juicy orange, you can recognize the clementine by its slightly lighter, yellowish flesh.

Mandarins have many stones inside. That is why children do not like to eat them as much as the clementine, which has hardly any seeds.

The peels of the two citrus fruits also differ. Clementines have a much thicker, yellow-orange skin that is more difficult to loosen. As a result, clementines are much more resistant to cold and pressure than mandarins. If stored in a cool place, they will stay fresh for up to two months. The very strong orange peel of mandarins peels off a little from the fruit during storage (so-called loose peel). Mandarins therefore usually reach the limit of their shelf life after 14 days.

We find another difference in the number of fruit segments. Mandarins are divided into nine segments; clementines can contain between eight and twelve fruit segments.

Both mandarins and clementines exude a fragrant scent. This is caused by the small oil glands on the shell that look like pores. In terms of taste, the mandarine is particularly convincing with an intense aroma that is a bit tart or sour than that of the clementine. Since clementines are sweeter than mandarins, they are often used to make jams - perfect for the Christmas season. 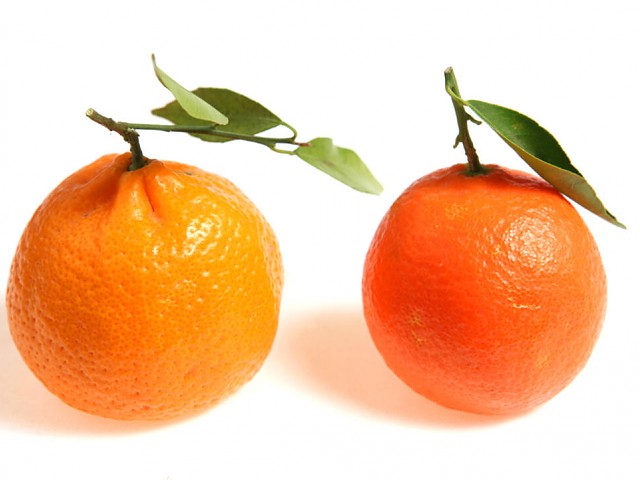